Anthrax, Death Angel & Children of Atom: Knitting Factory, October 16, 2016, Spokane WA.
I HAVE RETURNED!
https://youtu.be/4BaDU8T6URw
October of 2014 was basically the beginning of my dialysis treatment along with my chemotherapy for a rare form of testicular cancer. My last concert was Nine Inch Nails & Soundgarden in Las Vegas with my buddy Jesse. Time has passed by quickly, but I have been through a living hell in those two years and I pray that my cancer does not flare up anytime soon (for I am not out of woods on that nightmare). Dialysis continues on for life now and you never really get used to the schedule and how it makes me feel afterwards. I am weakened, achy, lethargic and all I wish to do is melt into a chair or go to bed. Dialysis has ruined my daily schedule and it’s the focal point to three days of my week. I work while I’m there and so blessed I remain employed all these years through all this turmoil. It’s not easy on anyone in my life and I cannot feel bad enough about it for having so many deal with my issues. But, let’s not dwell too much on negative or the crap that slows me down, for this moment in time was long overdue…to get back to experiencing live music once again! A few attempts prior to this show did not happen but I was bound and determined to make this show!
What helped in making this show? A walker did. I’m weakened by dialysis, so I get short of breath and strength rather quickly but the more time away from dialysis, the better off I recover as my endurance increases by the hour. Still, I need the support of a walker now to REALLY get around. The walker really helped out a lot in getting around town to the venue from the parking garage. Once inside the attached restaurant to the venue, I was initially looked at in apprehension by a young blonde girl who didn’t know what to do with me, then another gentleman came along and said come on in and we’ll take you into the venue shortly. I was not expecting that kind of help/treatment but I gladly appreciated the opportunity to get in and settled before the crowd rushed in. When it was time, I was escorted through the restaurant, over to the wheelchair ramp to get into the venue. Once inside, I could basically pick anywhere I wanted to be “seated” for the night. If I wanted a table and chair, I could have taken one but I wasn’t interested in taking up any more space than possible and wasn’t about to drink so I did not need a table. I pulled up to a spot near center stage visually & high enough above the crowd to have a view basically without interference. I felt so blessed to have such access and felt very safe where I was at. Keep in mind, my walker has a seat built in and so I used that walker for my seat for the night, along with then having the ability to stand up when needed and the overall comfort in that walker seat was outstanding for such a long evening. It was all a great test to see how things would work out and I couldn’t have been more relieved. Another thing to keep in mind, having to swallow more pride in life and knowing that once you go out into the world with a walker, you’re that much less of a person in the eyes of the world. It’s an extremely lonely feeling. All eyes are on you for all the wrong reasons and I just tried to keep focused on the people that were kind to help out and then focus on the bands. When the night was over, get out without engaging a soul; it simply makes it easier to take.

Children of Atom (https://www.facebook.com/childrenofatom1138/) comes from Spokane. I was pleased to hear them begin to play, for it brought a smile to my face that I was there in the moment! I have returned to live music events! Children of Atom has a stoner rock edge to them and can jam quite well to bluesy ZZ Top-inspired grooves to the harder edge blues/groove sounds of bands like The Sword.  I was truly pleased to hear very decent opening act and I would look that band up for more tunes to hear what they have to offer.

Death Angel (http://www.deathangel.us/) has been a leader in thrash metal since its birth in the Bay Area back in the 80’s and the band continues to flourish and be an inspiration to all young rock n rollers today. Touring on the latest release “The Evil Divide,” the band played tunes from their beginning to now. I have seen Death Angel play before and I found them much tighter as they played with great precision and stronger than ever vocals by Mark Osegueda (I did have a giggle, though when Mark would speak to the crowd and he would try to get them excited for the next tune or thanked the audience after a song. I laughed because he sounded like Sam Kinison when screaming out). I still haven’t heard a Death Angel song where I feel any real connection and with that feeling, there’s a reason they are not part of the Big 4 in heavy metal. The next big four, perhaps. Exodus, Testament, Death Angel, & Overkill. Granted, Death Angel is a much respected and well-known founders/fathers of the Thrash Metal movement so much respect to them and their evolution in sound.

Anthrax (http://anthrax.com/) was simply fantastic once again! I have lost count how many times I have seen the band now, most have been in Spokane and each show just gets better and better. Joey Belladonna’s vocals remain incredibly strong. That’s what’s great about thrash metal, most thrash metal vocals are actually singing, not screaming. Not growling. Thrash metal is so well connected to orchestral music and grandiose theatrical elements; it flies off the walls with such intensity no one can sit still. Thrash metal remains such a vital part of the health of rock music. The technical playing by Scott Ian and lead guitarist Jonathan Donais was simply perfection and beautiful. Drummer Charlie Benante was not there but his clone was and played outstanding all night long. Setlist for the evening: (Impaled), A.I.R., Monster In the End, Caught In A Mosh, Madhouse, Got the Time, Fight ‘Em Til You Can’t, Efilnikufesin (N.F.L.), Medusa, March of the S.O.D., In The End, Antisocial, Be All, End All, Breathing Lightning & Indians.

When Anthrax played “In The End,” it was dedicated to Dimebag and Ronnie James Dio and I must say that tribute and some of the lyrics of that tune really seemed to hit home and I had a little happy-to- be-there tear in my eye thinking of all the shit I’ve been through in the last 2 years and again to make it back to the live music world and witness the mayhem, the smells, the sounds, the unfortunate greetings with drunk people and all the sights and senses that bring me back EVERY time to a live music event….there is nothing like it. So, thank the good Lord above and all the wonderful people in my life who help me every day so I can go out into the world once in a while and experience the great stuff in life like Anthrax! \m/ 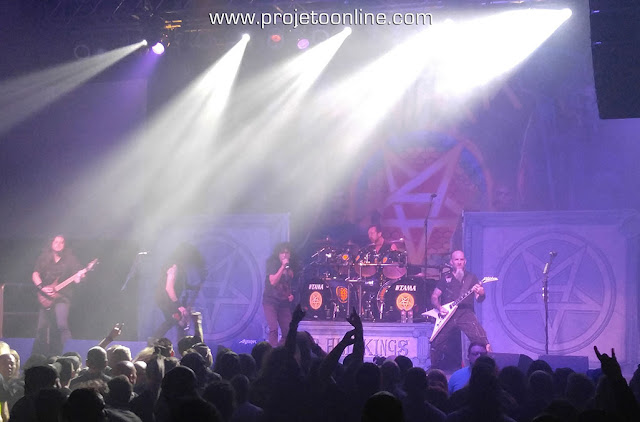 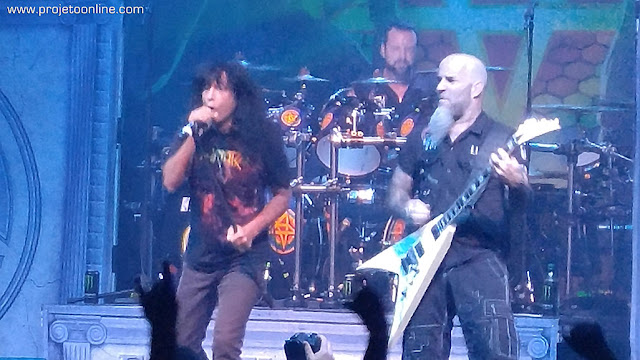 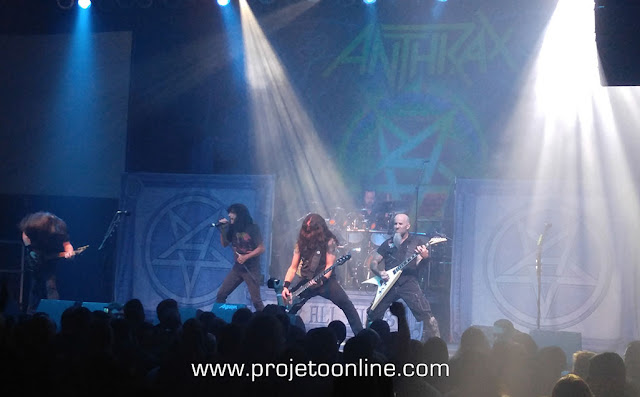